You might also want to read this web article by Timothy Rasinski entitled, Making and Writing Words. http://www.timrasinski.com/presentations/article_making_and_writing_words.pdfIn this discussion posting:Explain how the “Making Words” program described in Chapter 10, or how Word Banks or Word Sorts as described in Chapter 11 utilize the principles of constructivism which is briefly defined on page 155.

Describe at least two other ways you will use constructivism in your classroom to teach reading. Lastly, explain why it is important to employ constructivist principles when teaching reading, especially beginning reading.

AlthoughMakingWords is very effective in its original form, Tim has developed a variant calledMaking and WritingWords (MWW) (Rasinski 1999a). Rather than use letter cards or squares, which can be cumbersome (Beth hasn’t mentioned this, but we have noticed that it takes her a few minutes to distribute and collect the letter cards with every lesson),Making and WritingWords uses a form sheet on which students write thewords as they are made. Because the form sheet is generic and can be used for any MWW lesson, it alleviates problems associated with creating letter squares, sorting them before and after lessons, and keeping track of letter squares during the lesson. In short, the sheet makes the activity logistically less complex. Since MWW requires some facility in writing, students in the first half of first grade or below may be better suited for theMakingWords using the letter squares.

As inMakingWords, MWW begins with the specification of letters (vowels and consonants) to be used in the lesson. These are listed at the top of the MWW sheet in the appropriate box (see Figure 10.1). Beneath this listing of letters are empty boxes in which students will writewords under the teacher’s guidance and direction. The teacher reminds students that for any one box, they may use only those letters that are listed at the top of the page, and only one use per letter is allowed for any word unless more than one of the same letter is listed at the top.

The first part of the activity begins with the teacher pronouncingwords or providing clues forwords to be written in each of the boxes. The teacher should have a transparent blank form or access to a computer and projector so that he or she may do the activity with the students. Figure 10.2 shows a typical scenario of howMaking and WritingWords might be used. 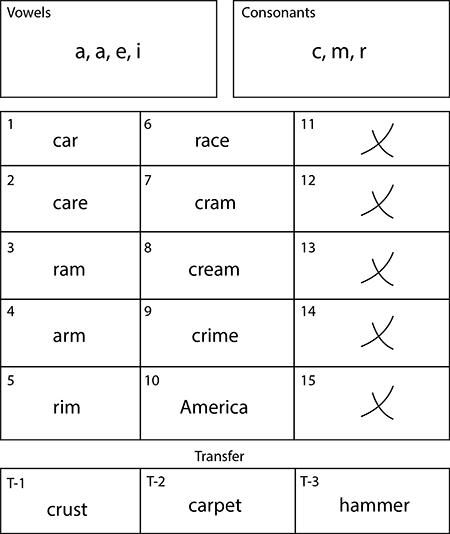 Each student has a blankMaking and WritingWords sheet. The teacher instructs the students to write the following letters in the appropriate boxes:

For Part 1, the teacher either pronounceswords or gives clues to thewords and asks students to write them in the appropriate boxes, beginning with shortwords and moving on to longerwords.

“OK, in box number 1 write a three-letter word that is another name for an automobile.”

“Good, now write car again in box 2 and add one letter to make the word care.”

“Now in box 3, write the word ram. Does anyone know what ram means?”

“In box 4 use the same letters as in ram to make a word that is a part of your body; your hand is attached to it.”

The teacher may lead the students in a discussion of otherwords that have the am and im phonograms or rimes. These could be listed on the board.

The teacher continues through otherwords such as race, cram, cream, and crime. The MWW activity sheet has room for 15words, but a teacher can stop anywhere. The last word in any MWW activity is a secret word that uses all the letters. Without further clues, students are challenged to determine and spell the final word. In this case the secret word, America, goes in box 10. The final word could relate to something that is under study in another part of the curriculum, an introduction to a story about to be read, or a word related to a current event or time of year.

As inMakingWords, after all thewords have been written, the teacher guides the students to transferwords they used in Part 1 to newwords that follow some of the patterns or principles found in thewords just written (Part 2). Inmaking transferwords, any letter of the alphabet can be used—students are not limited to the letters used in Part 1 of the lesson.

In the boxes marked T-1, T-2, and T-3, the teacher directs students to writewords related to those in boxes 1 through 10. In this example the teacher asks students to look over thewords they have just written and write thewordscrust in T-1, carpet in T-2, and hammer in T-3. Students give it a go and then talk about the information they used in Part 1 to figure out the transferwords.

Part 3 ofMaking and WritingWords involves students sorting thewords. Students cut out each word written on the MWW sheet into individual word cards, which can be kept in an envelope as students work with them over the next several days. In the word sorts, the teacher provides students with categories and the students sort their word cards into the appropriate piles. Here are some of the sorts the teacher may pose with the 13words from the MWW activity:

Not all the sorts have to be letter-sound related. Teachers can also have students sortwords into semantic or meaningful categories, such as:

Eventually, students can assume more responsibility, including leading the word sorts. Many students will demonstrate a lot of creativity in leading this part of MWW. Additionally, older students can write the word sort categories andwords, rather than cutting thewords into word bank cards and sorting them manually.

Oncewords have been made, transferred, and sorted, thewords made in the MWW lesson can be added to the classroom word wall and to students’ personal journals for further use. Thewords can also be used for word games and, perhaps, can be added to a spelling list for further study.

As inMakingWords, planning for MWW begins with the final or challenge word. Once the challenge word is determined, teachers simply brainstormwords that can be written from the letters, going from shortwords to longerwords, and developing clues. Online resources (see box) are useful for planning MWW. From a list of anagrams for the challenge word, it’s easy to make note of appropriatewords.

The challenge word and sequence ofwords used inMaking and WritingWords should be guided by students’ abilities. Beginning readers may benefit most from five- and six-letter challengewords containing one vowel. Students in late grade 1 through 3 may findwords with six to eight letters and two vowels appropriate. Older students in grades 4 through 6 will be appropriately challenged by secretwords longer than eight letters and containing three or more vowels. Beth has found that challengewords in the seven- to eight-letter range work very well with her first-graders in April.

Need your ASSIGNMENT done? Use our paper writing service to score good grades and meet your deadlines.

Read the articles:  Classical Argument (Links to an external site.)Links to... Problem 1 . ( 10 points . ) This problem is based on the Ricardian Model . Assume...
Scroll to top

Hi there! Click one of our representatives below and we will get back to you as soon as possible.

Support
Chat with us on WhatsApp